About the Dakota Zoo

The Dakota Zoo began with the 67 acre Marc and Betty Christianson Farm located at what was then the north edge of Bismarck. Initially, the Christianson Farm operated as a kennel for the boarding of domesticated animals such as dogs, cats, horses and, at one point, was even used to raise mink for profit. However, over time, friends and neighbors who knew the Christiansons and knew of their love for animals began stopping at the farm to deliver stray and/or injured animals with the knowledge that they would receive the care they required.

As the number of animals increased and word got out about the farm and its collection of animals, curiosity also increased, drawing an ever increasing amount of visitors to view the animals. The number of visitors to the farm would peak on "skip day" each year when school buses would transport loads of school children to view the animals housed there.

Publicity by the Marshal Bill Show on KFYR played an important role in the formation of the Dakota Zoo. Petitions were signed by 780 people who supported the idea of a community zoo located in Bismarck. Marc Christianson took these signed petitions to the Bismarck Park Board to present his idea of a zoo. He pitched the concept as an entity which would be self-supporting and would require no funding from the City of Bismarck. The case presented by Marc to the Park Board was such that in 1958, with the support of the late George Schaumberg, then the Bismarck Parks and Recreation director, the Park Board made available to the zoo an 88 acre tract of Park District land in Sertoma Park.

Initially the majority of the construction work completed at the zoo was done by Marc and his crews, using building materials he had scrounged up or which had been donated. However, there were some projects which could not be accomplished without the goodwill, trust and spirit of members of the community. 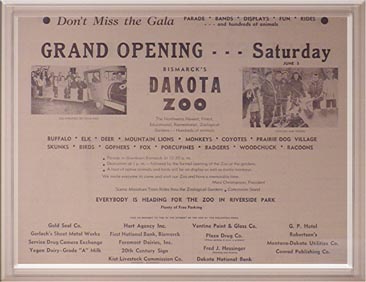 On June 3, 1961, the Dakota Zoo opened its gates to the public with 75 mammals and 23 birds on some 15 acres of developed land. Forty thousand visitors paid a ten cent admission fee that first year to visit the zoo. Today, an average of over 100,000 people walk through the gates each year and view 125 species of birds, reptiles, insects and mammals. Memberships today total approximately 3400.

In 1987, the Dakota Zoo was challenged by the Bismarck Tribune to develop a masterplan which would outline the orderly and organized development of the zoo. This challenge was accepted by the zoo board and a plan was developed. The masterplan is reviewed and update on an ongoing basis, with the last major revision taking place in 2005. The masterplan serves as a “roadmap” of where the Dakota Zoo is going in the future.

In 1988, the Beyond the Bear Necessities capital campaign began. This campaign, Dakota Zoo's first ever attempt to raise large sums of money, raised $1.2 million. Exhibits such as the bear habitat, river otter exhibit and canine and small animal exhibits were constructed as a result of this campaign.

In late 1996, the second major capital campaign, Discovery 2000 - Turning Dollars Into Senses was launched. The goal of this campaign was to raise at least $1.5 million for continued major improvements. Exhibits constructed as a result of this campaign endeavor include moose, mountain goat, mountain lion, bobcat, lynx and the Discovery Zoo.

In 2005, our third major capital campaign, Make the Big Cats Roar, was launched. The celebration goal of just over $1.9 million was reached by the fall of 2005. Exhibits constructed as a result of this campaign include the Jack & Joyce Schuchart Big Cat Complex, housing tigers and snow leopards, the Heringer Family Primate Center, home to seven endangered primate species, and the Coca Cola pavilion at the north end of the zoo housing rest rooms and refreshment vending.

The Dakota Zoo remains self-supportive and operates on monies raised through admissions, concession sales, the adopt an animal program, memberships and donations. Since 1991, the Dakota Zoo has continued to meet the high standards that are required to be an accredited member of the American Zoo and Association of Zoos and Aquariums (AZA). 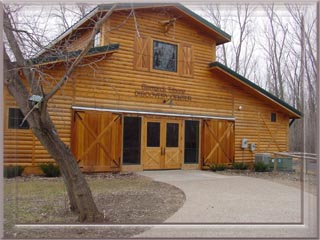